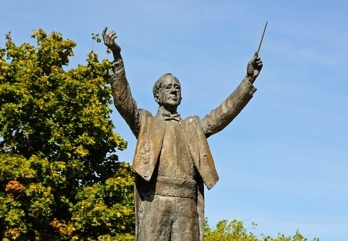 One hundred years have passed since Gustav Holst commenced work on his famous orchestral suite, The Planets. Since then, his beloved works have been performed thousands of times across the globe, have been used in film and television and have even been adapted into a rock concert for the modern audience. At 4 Clarence Road, Cheltenham, the Holst Birthplace Museum gives visitors a chance to explore the birthplace and childhood home of this revered composer.

Gustav Theodore Holst was born on the 21st of September in 1874 to parents Adolph von Holst and Clara Cox in the regency townhouse on Clarence Road in Cheltenham. The former residence of Holst where he learned to play the piano and create compositions is now home to a museum that documents his success as a composer.

Holst studied at the Royal College of Music in London and married a chorister, Isobel Harrison, with whom he had a daughter, named Imogen. Between 1914 and 1916 Holst worked on his most well known work, The Planets.

The Holst Birthplace Museum is a fine example of a Victorian regency townhouse. Each room has been furnished to portray a typical middle-class house from this era.

On the ground floor, visitors can view the piano that Holst used to compose The Planets, along with other personal items that belonged to him, including his armchair and music stand. The nursery is located on the top floor where there are a number of toys on display, as well as toys for young visitors to try out.

The basement kitchen gives visitors a fascinating insight into how meals were prepared and food was stored. At certain times of the year, cookery demonstrations take place here, using ingredients and methods from the Victorian era.

Other Museum Highlights Include:

The Holst Birthplace Museum is located on Clarence Road in the centre of Cheltenham with close proximity to the high street. There is no parking on-site with the nearest car park being on North Place, which is approximately 3-minutes away on foot.

The museum is serviced by a bus stop on Clarence Road that is on a number of different routes. A regular bus service operates between the museum and Cheltenham Spa Rail Station, which is approximately 2-miles away.