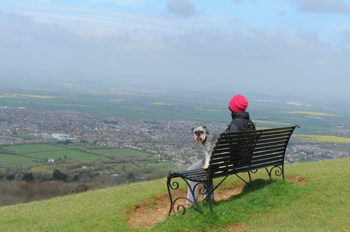 At 1,083 feet or 330 metres above sea level, the summit of Cleeve Hill boasts the highest point in the Cotswolds. Whilst this hill is small in comparison to its Welsh and Scottish cousins, the views that it offers are outstanding and rival those seen from its Celtic counterparts. Cleve Hill is famous for those who like walking through the countryside and enjoying impressive landscapes of the Cotswolds with clear views of Cheltenham and beyond. There is a looped trail that includes the summit, which will take around 3-hours for someone with moderate fitness to complete.

For visitors who do not wish to undertake the ascent on foot, Aggs Hill (via Harp Hill from Cheltenham) offers access very close to the summit trig point at the south of the hill. However, the summit is a relatively flat point and better views are obtainable from the north side of the hill, which is not accessible by car.

To access the best views from Cleeve Hill, it is best to start the ascent at the quarry (Grid Reference: SO989272) and follow the national trail – the Cotswolds Way – up a relatively steep climb. You will eventually reach the first trig point at 317 metres above sea level. Whilst this does not mark the highest point of Cleeve Hill, it is where visitors tend to find the most spectacular views across the Vale of Evesham, which is the inspiration behind Tolkien’s Middle Earth. You will also see stunning views across Cheltenham, as well as into Wales. The unsurpassed panorama makes this an excellent stopping point on the walk. The point is also marked by “The Single Beech,” the highest tree in the Cotswolds, which holds a number of plaques dedicated to the memory of people who have enjoyed this beautiful spot.

To reach the main summit, walkers can continue from the first trig point along the Cotswolds Way and eventually turn left at Whites Barn toward a number of radio masts. There is another trig point here marking the 330-metre elevation – the highest point of Cleeve Hill.

When doing a circuit around Cleeve Hill, keep your eyes out for a number of points of interest. These include:

Nearby Places to Visit

Once walkers have finished their ascent, refreshments can be found in the Cleeve Hill Golf Course restaurant, which is also open to non-members and serves a reasonable range of meals, drinks and light snacks. Furthermore, the nearby villages of Bishops Cleeve and Woodmancote have a number of pubs and restaurants that serve traditional and modern British cuisine in picturesque chocolate-box village settings.